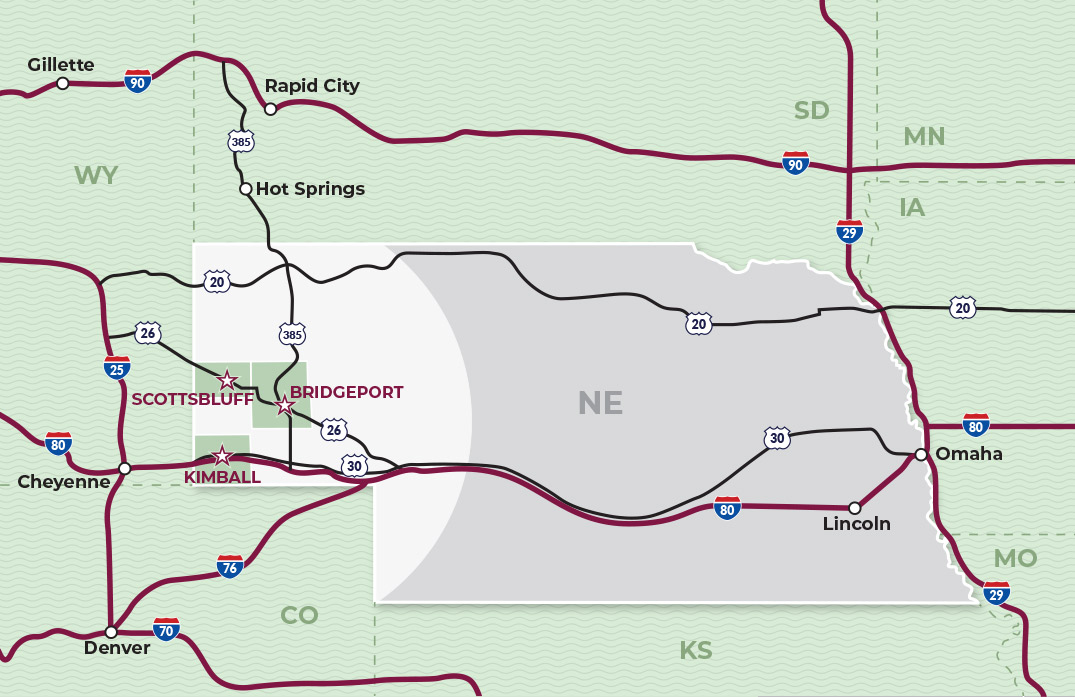 The twin cities region of Scottsbluff and Gering is the best of the Western Nebraska Panhandle — exuding midwest charm. Low cost utilities, a reliable workforce, efficient market access, and available properties only add to our appeal.

The North/South Corridor includes the designated Heartland Expressway from Mexico to Canada. The corridor runs right through Scottsbluff and Gering, NE, on Highway 71/Highway 385 and is a natural stopping point because it is the geographical “halfway” point. The East/West Corridor is on Interstate 80 stretching between the East and West Coasts of the United States.

Our region is in the center of the nation with transportation corridors stretching north/south and east/west. Product can usually be trucked to market in less than one to two days to most locations in the United States.

In addition to roadways, rail service is provided through Burlington Northern Santa Fe Railroad (BNSF) and Union Pacific (UP).

The Western Nebraska Regional Airport (WNRA) provides a gateway to the nation with direct flights to and from Denver, Colorado.

Average commute times in our region are less than 15 minutes. The Panhandle Trails Intercity Public Transit provides bus service throughout the Nebraska Panhandle and links passengers to other transit services that provide access to the surrounding states of Wyoming, South Dakota, Iowa and Colorado and extend to Illinois, Missouri, Montana, New Mexico, and Texas.